Will the Grounhog See it's Shadow? 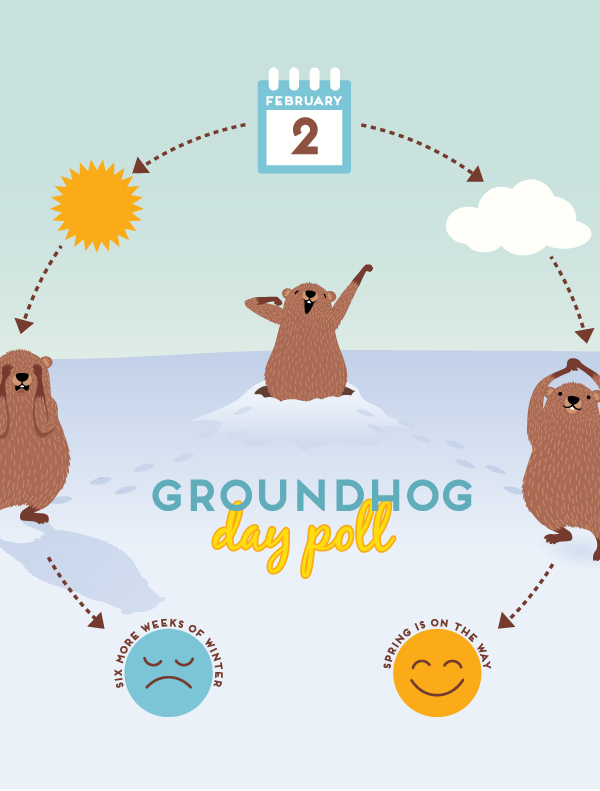 Got spring on the brain? So does the groundhog. This Thursday, February 2nd (Groundhog Day) the groundhog will come out to see whether or not it sees its shadow.

Groundhog day is a holiday celebrated in the United States, where we all eagerly wait for a groundhog to let us know whether we can expect an early spring or not. The groundhog looked to is named Punxsutawney Phil, and resides in Punxsutawney Pennsylvania. This year will be his 131st Groundhog day.

When Phil emerges from his burrow on the morning of February 2nd, he is either going to see his shadow or not see his shadow. So what does it mean? If it is a sunny morning and he sees his shadow, he will return to his burrow to sleep for six more weeks of winter. If it's a cloudy day, and he doesn't see his shadow, folklore says we can look forward to early spring.

We want to know what you think will happen! Head on over to our Groundhog Day Poll to cast your vote, whether you believe we will have six more weeks of winter or early spring.

Either way, spring is in sight. Learn more about Groundhog Day and Punxsutawney Phil at Groundhog.org.